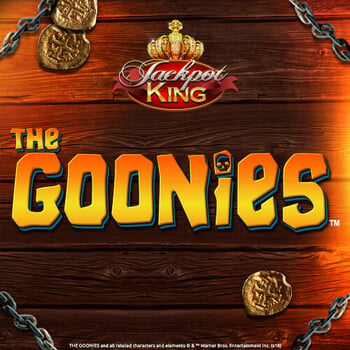 About The Goonies JPK

When you play The Goonies Jackpot King slot, nine standard symbols and several special symbols will be presented to players. Their goal is to match at least two or three regulars across any active line to receive payouts. The winning combinations must appear in a row, starting with the leftmost reel. All wins across various lines add up to form a cumulative win, with only the highest win per way paying out.

The lowest-paying symbols in The Goonies Jackpot King game are the standard poker playing ranks, from jacks to aces. Prizes up to 100 times the line bet can be won by collecting three or more of each. Next in line are the more lucrative weighing scale, a skeleton, a pirate ship, and a treasure chest full of cash.

Up to 300 times your line bet will be awarded for five of a kind. When playing the Goonies Jackpot King slot, players should keep an eye out for additional pirate flags. When at least two of a kind is achieved, it offers rewards ranging from two to a respectable 500x the line bet.

By getting the One-Eyed-riches Willy's symbol on your reels, you can randomly trigger any of the game's six main features. These bonuses feature extras like additional wilds being thrown onto the reels, a free spins round, and a number of other mini-games. They are all based on the characters in the film. Watch out for the Sloth's Win Spin feature, where the sloth swings in front of the reels and changes all of your symbols into winning combinations. This may result in very significant rewards.

The One-Eyed Willy bonus feature, which includes the other six games, is activated randomly throughout the course of the game. You must spin a reel to find out which of the six features you will receive after these are triggered. These features are also focused on characters and will award you with rewards similar to those from the other features.

What is the maximum bet for The Goonies JPK?

The maximum bet for The Goonies JPK is 500.

What is the minimum bet for The Goonies JPK?

The minimum bet for The Goonies JPK is 0.10.

Can I play The Goonies JPK on mobile?

Yes, you can play The Goonies JPK on any Android or iOS device.

What is the RTP of The Goonies JPK?

What is the biggest potential win for  The Goonies JPK?

The biggest potential win for The Goonies JPK is 10,000 times your stake.

The Goonies JPK at Genting Casino

The Goonies Jackpot King online slot is available at Genting Casino. Slot machines, table games, and live casino games are all available in abundance on the website. Visit Genting Casino online to play any of these games in the comfort of your home on any device. The Goonies Jackpot King is a fun online slot game. What was already a fantastic slot-playing experience is made even better by the inclusion of the Jackpot King features. Both inexperienced and seasoned players will delight in playing this slot.