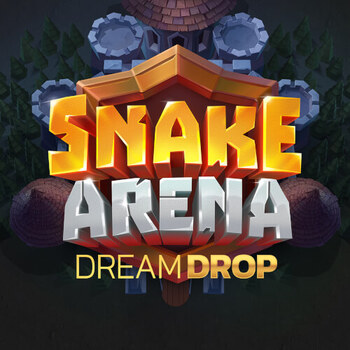 The slot's central theme and story are based on a classic game called The Snake, which you've probably played before. A giant serpent has escaped and began attacking the warriors in this particular slot. Snake Arena Dream Drop slot online is unique in that it appears to have drawn inspiration from chess in the design of the reels, in addition to the traditional Snake game. In terms of design, the slot's overall visuals are fantastic: it has an animated but highly detailed and vibrant theme that is complemented by epic music.

There are both special and regular symbols, just like in any modern and Relax Gaming slot. The regular symbols are the four different types of coins, all of which have the same value of 0.20x, 0.70x, and 2x if you collect 3, 4, or 5 of them, making them the game's lowest paying symbols. A glass of beer, a chicken leg, a ring with a snake's eye, and a crown-like statue, which is also the game's highest paying symbol, paying 1x, 5x, and 20x your stake for combinations of 3, 4 and 5.

The free spins feature is triggered if you land on the snakehead and knight symbols at the same time. Before the new spin, the snake will move towards the knight and eat him, causing the snake to grow in length and triggering a new spin. If the serpent's body is in the way, the snake will attack itself, and the Free Spins feature will end.

Before the standard spin, the Jackpot Spin is triggered at random. The Dream Drop bonus will be triggered if you land on one Dream Drop symbol on each reel. You must first play the Jackpot Spin to activate this generous progressive jackpot feature. At least 5 x Dream Drop symbols must be landed to be eligible to spin the bonus wheel. Spin the wheel for a chance to win one of the following jackpots: Rapid jackpot, Midi jackpot, Maxi jackpot, Major jackpot, and Mega jackpot. The Wild Chase feature is triggered entirely at random, turning 1 to 5 reels into fully wild reels for additional winning potential.