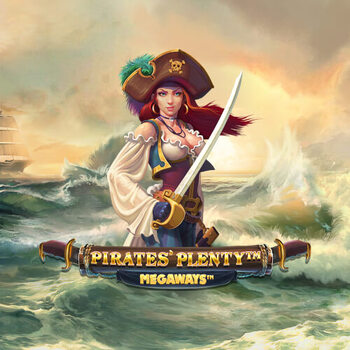 Produced by
Red Tiger
Pirates Plenty Megaways slot is an interesting video slot that takes its players on a treasure hunt. The game has been developed by Red Tiger, a highly innovative video slot provider. The slot has in-game features such as the Ocean Spins Feature and bonus symbols such as the wild and scatter symbols that will definitely make gamblers keep on playing this adventure-filled slot game. To play Pirates Plenty Megaways video slot, gamblers have the option of playing it on either a PC, mobile phone or tablet thanks to the developers of the slot, Red Tiger. The game is compatible with devices that support Android, Windows or iOS operating systems. Additionally, players can switch devices without the worry of losing game progress or game quality.

Players can access Pirates Plenty MegaWays slot online through a variety of common mobile browsers as well. This makes the game easily accessible and available for everyone across the world. The game board features 5 reels although, players can unlock the 6th reel if they land a number of treasure map symbols. Also, the game features 3 rows with between 20 to 30 paylines.

When it comes to the wagering requirements, gamblers have the option to play Pirates Plenty MegaWays slot with a minimum of 0.20 Coins or a maximum of 20 Coins per spin. The maximum win is 5,000x a players stake which isn't easy to score thanks to the high variance nature of the slot. As for the RTP, it generously stands at 96.12%.

When players unlock the Treasure Reel feature, they have the option of landing wild ships which may carry multipliers starting from 1 up to 5 times. To unlock this feature, players have to collect the Treasure Map symbol whereby collecting them fills a symbol meter. When it's full, the 6th Reel is unlocked and stays active until the player changes their stake.

The player unlocks the free spins feature by landing 3 scatter symbols anywhere, which rewards them with 10 free spins and additional 3 locked treasure chests above the reels. To unlock the treasure chests, players need to land the ghostly captain on the reels which turns 1 or 2 low-value symbols into the wild symbols, whereas, opening the 3 at once turns all symbols into wild symbols.

The wild symbol in Pirates Plenty MegaWays is represented by a monkey and when it shows up on the players' reels randomly in the base game, it steals the low-value symbols which are then replaced by high-value symbols. Alternatively, there is the wild ship symbol which, can cover the entire reel, turning all symbols into wild symbols. They also come with a 2x, 3x or 5x multiplier.

It's evident that Pirate Plenty MegaWays video slot by Red Tiger is the complete package that will definitely interest gamblers around the world. The fact that the game also features several bonus features with a good Return To Player rate of 96.12% shows that the game is a fairly friendly game to players and interested gamblers should visit Genting Casino Casino for a chance to play this exciting slot.