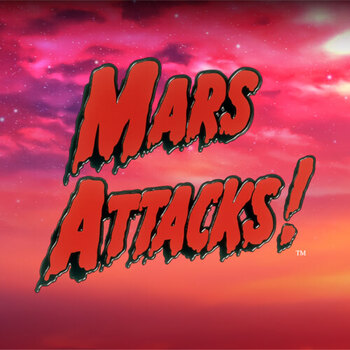 Produced by
Blue Print
Mars Attacks slot is a Blueprint Gaming online slot with 5 reels, 3 rows, and a total of 20 fixed paylines. There are five bonuses and features in total: Final Stand, Martian Takeover, DNA Analysis, We Come In Peace, and Spy Hunter. These are all important parts of the game. With a potential RTP value of 96.44% and a high level of volatility, Mars Attacks slot game is playable on all devices from 0.10 to 500. The maximum possible win for Mars Attack slot machine is 10,000 times your stake.

The aesthetic is completely consistent with the film, with the kooky Martians serving as symbols and the reels set against a backdrop of the White House. The opportunity for players to win one of three progressive jackpots.

Mars Attacks slot online comes with four low-value symbols J, Q, K, and A royals and five premium eye-ball rings, television sets, zap guns, Martians, and the Mars Attacks! logo. The latter, along with the Wild symbol, is the most lucrative and pays out 25 times the stake for 5 across a full pay line. This slot also has six bonus features and a random base game feature called Mars Attacks! Modifiers. When triggered, players receive one of the five features listed below:

The bonus is triggered when three or more Scatter symbols appear anywhere on the reels of the Mars Attacks game. Players are then asked to select a zone on a world map that will be invaded by Martians, which will award one of the five bonus rounds available:

What is the maximum bet for Mars Attacks?

The maximum bet for Mars Attacks is 500.

What is the minimum bet for Mars Attacks?

The minimum bet for Mars Attacks is 0.10.

Can I play Mars Attacks on mobile?

Yes, you can play Mars Attack on any Android or iOS device.

What is the RTP of Mars Attacks?

What is the biggest potential win for Mars Attacks?

The biggest potential win for Mars Attacks is 10,000 times your stake.

Mars Attacks is available at Genting Casino. The site contains a great selection of slots, table games, and live casino games. You can enjoy these games wherever you are using any device when you visit Genting Casino online. Mars Attacks has all the nostalgic elements of the movie and if you have not seen the movie it is okay because this slot can be highly rewarding with a 10,000x your stake max possible win.