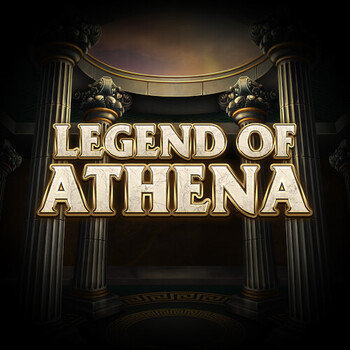 Are you ready to lead, to be revered, and to lay witness to the glory of battle? The Legend of Athena game takes you to a greek mythology themed atmosphere of gaming that enthralls you to be part of this lore that is of the gods. Take charge of your fortune and raise Athena’s Spear and march on.

The game Legend of Athena is played on a five reel and three row grid crisscrossed by 10 fixed paylines. The reels are adorned by pleasing marble effects, decorated by spears  and are displayed inside a temple structured by columns. The theme of the game brings about a minimalistic style of classical Greek history.

The Game can be played on any personal computer and any other devices with a stable or good internet connection. The game offers a return to player value of 95.75%. The volatility of the Legend of Athena game rests on the high range with minimal features, making the game more streamlined and on center focused. High symbol values provide decent wins, particularly in free spins where various multiplying capabilities arise. The regarwins are brought by matching the symbols land left to right starting from the first reel, A 10-A card symbol rewards a low pay with three or more. Harps, helmets, horn cups and pots all depict a high pay and value which you will be crossing paths with most of the time. Your stake can be up to about twenty four and up to two hundred times, by landing full lines of five premiums.

Athena makes her glorious appearance on the spear of Athena Wild. A multiplier of x3 and is applied to the value of the payout when this symbol becomes a part of the win line. The Crossed Swords Scatter is a symbol to take note of and so much more.

Don't miss a chance to explore and be a part of the Greek mythology theme atmosphere brought out by the Legend of Athena. Always watch your bets and play to your comforts.