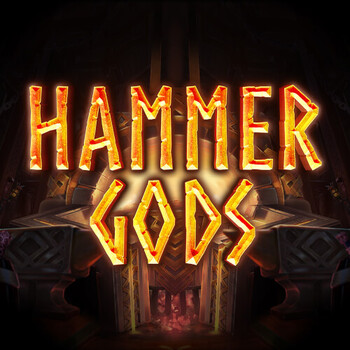 Produced by
Red Tiger
We have seen a rise of Norse Mythology themes in movies, TV shows, and video games recently. And online slots is no exception! The Hammer Gods slot machine is filled with Norse themes and references for you to enjoy. Call upon the favor of the gods and find out if you can earn your luck to get the riches of Valhalla in the Hammer Gods slot game.

Deep in the heart of the mountain is the forge of the gods. Embers sizzle and flames rise as you get near the source of power of the gods. Wield mighty hammers and pray that they hit the right spots. Fuel the embers of gigantic rewards that are up for grabs. If the fates smile down on you. Take the journey amidst gods and flames and with a little luck on your side, emerge victorious as you play Hammer Gods!

Red Tiger has released yet another excellent game in the form of the Hammer Gods online slot. The background of the game presents a beautiful tapestry of Norse landscapes. While the reels and the symbols of the game stays true to the mythical fantasy style of the game. Full of fantastic visuals and godly effects, this Norse-themed game will entertain you as you try your luck to get those divine rewards.

Play Hammer Gods slot and forge your fortune in this 5x4 reels slot game. It has 30 paylines with a high volatility. The highest RTP percentage is slated at 95.69%. Test your mettle and see if you can pass the test of the gods. Keep an eye out for symbols such as hold nugget, gauntlets, and the mighty Brokkr hammer to smash you way into success!

Hammer Gods slot online has four fun features to keep your gameplay going. Let’s talk first about the Super Symbols. The Red Hammer and the Blue Hammer. These triggers all the other features that can bring you pay multipliers or free spins. Unleash the might of the Brokkr Hammer and turn all low-paying symbols into one higher-paying symbol. This can occur again for further symbol upgrades!

The Sindri Feature transforms symbols into Wild symbols to better match what’s on the current reels. When two Super Symbols land during a single spin. You can get 10 Free Spins immediately. Don’t forget that symbols pay from the leftmost reel to the right. And the maximum win amount of the game is at x600 your initial bet.

The Hammer Gods game can be played online at Genting Casino. Place your bets and let the gods decide your fate. Play the Hammer Gods slot today!