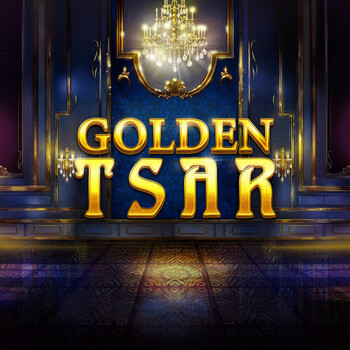 Played out in an opulent golden mansion befitting the magnificence of pre-revolution Russia, the game dazzles with Tsar Spins, Super Symbols, Gold Egg scatter symbols and the Royal Expand feature. Played over 6 reels, 4 rows and 30 fixed paylines, the maximum payout is 1,380x the stake. Bets range from 0.10 to 40 per spin.

Three for the low pays in Cyrillic symbols, and two at least for the highs need to land on a payline, starting from the leftmost reel to form a win. A prince, a princess, the tsarina and a crowned tsar are the premiums, worth from 7.2 to 25x the stake. Because royals want to keep their bloodline pure, there is no wild in the Golden Tsar. Combinations can only be formed using identical symbols. Four meters above the reels correspond to each of the 4 premium symbols. Whenever a premium win occurs, the respective progress meter is partially filled as part of the Royal Expand feature. When a meter is completely filled, the respective royal member symbol becomes a 1x4 Super Symbol. Super Symbols pay from any position on all win lines and do not need to be adjacent to each other. The special symbol expands when regular win lines are paid, paying out the newly formed win lines. If there is more than one full meter at the same time, the symbols expand one after the other. Tsar Spins are triggered by 3 or more Golden Egg scatter symbols landing anywhere on the reels. Players get 3 Tsar Spins for every Golden Egg in view, up to 18 at most. Before the Tsar Spins start, the progress meter of one of the symbols is randomly filled for the full duration of the bonus. It is possible to keep filling other symbols' meters during Tsar Spins which results in all 4 actively expanding for the full duration. Whenever a meter is filled, 5 more spins are added to the remaining amount total.

Register to Golden Tsar on Genting Casino, playable on all mobile devices. Set your limits before you start gambling.