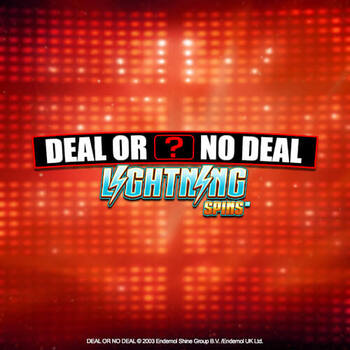 One of the world's most famous tv game shows comes to the online slot market yet again. Blueprint Gaming is here for its latest take on the Deal or No Deal franchise. Deal or No Deal: Lightning Spins brings it up a notch by offering an insane 50,000x win which rivals its Megaways version. The bonus game retains the principle of making a deal with the banker or not plus its new Lightning Spins feature. Like in the game show, players choose from 22 briefcases with cash values up to the total of max wins. By picking boxes, the contestant eliminates the sums of the player's chosen briefcase. The banker tries to persuade players with increasing offers. Buying the player's box. The theme's game concept goes in line with the Lightning Spins feature.

Deal or No Deal Lightning SPins is a branded online slot that does a great job of featuring the game show in a slots format. In addition, players can win 4 different fixed jackpots via the Lightning Spins free spins round. One of it being 1,000 the stake. The game plays out in a TV studio setting and visually looks like a smaller version of the Megaways game. It comes with 5 reels, 3 rows, and 20 paylines. Winning combinations are made by landing three or more matching symbols.

The Return to Player value is at a standard 96%. It's also packed with a high variance. Symbols on the reels of the Deal or No Deal Lightning Spins include bonus symbols plus high and low-paying symbols. The first bonus to encounter in this slot is the Lightning Spins feature. This is where jackpots are triggered serving also as a respin bonus with wins based on the total value of the symbols. Deal or No Deal?