Conan slot online is a thrilling new slot experience developed by NetEnt. Coming in with 6 reels, 4 rows and 24 paylines, this slots game is divided into three sections, each being 2x4 in size and connected to a particular feature. Free spins and multiple bonus features are all up for grabs in this epic sword and sorcery-themed adventure, allowing for great opportunities to conquer with some very big payouts. 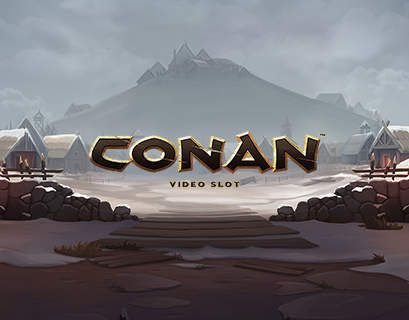 Set within a cold prehistoric world filled with dark magic, Conan Slot online features several animal symbols. The lower paying symbols consist of snakes, lions and falcon coins, while the higher paying symbols consist of characters and weapons-based items, including grappling hooks, swords and helmets. Landing a combination of 5 or more symbols with the beastly Conan himself, who is the highest paying symbol, gives you up to 6 times your stake. The wild symbol is a large W, which has the power to substitute all regular icons to create winning paylines.

The Tower Wilds feature appears on reels 1 and 2. Tower Wilds can appear and expand to cover the reel partially or entirely. The Mystery symbols feature appears on reel 3 and 4 and can appear as single or stacked symbols. If you get a fully stacked mystery symbol on reels 3 and/or 4, you will trigger the Mystery Multiplier feature, giving you a multiplier of up to 7 times. If a mystery symbol appears in combination with a tower wild and battle wild, the Thoth Amon feature comes into play. When triggered, up to 6 mystery symbols are randomly added to give you a mightier win. The Battle Wilds feature covers reels 5 and 6. Battle Wilds appear on both these reels and expand up to 3 symbol positions sideways to an adjacent reel.

Conan Slot also comes with a Linked Reels feature - the reel pairs in each of the three 2x4 sections have a chance of being linked with the other reel in the same section to display the same symbols. This will help you increase the chances of landing bigger payouts. This game has a medium to high volatility with a return to player (RTP) of 96.28%. Minimum and maximum bets are set at 0.20 - 200 per spin.

When 3 or more scatter symbols land, Conan unleashes his power in the form of 3 free spins games, with the potential of giving you up to 50 free spins! You will be asked to decide between the three modes; City of Thieves, Temple of the Serpent or Walls of Tarantia.

City of Thieves sees tower wilds that appearing on any reel and expanding to cover the reels either partially or entirely. In Walls of Tarantia, you'll see battle wilds appearing on all reels, expanding up to three positions sideways. The most volatile of the three is Temple of the Serpent, with its multipliers leading to the biggest payouts. Here, mystery symbols, including stacks, can land on all reels. Landing between 5 and 9 mystery symbols will also trigger the Thoth Amon feature.

It's time to loot all the riches! Bringing you the thrill and the brute force of this well-known fearless phenomenon, Conan Slot online delivers loads of bonus features and all sorts of bonus symbols including wilds and scatters, you could be in the chance to win big!