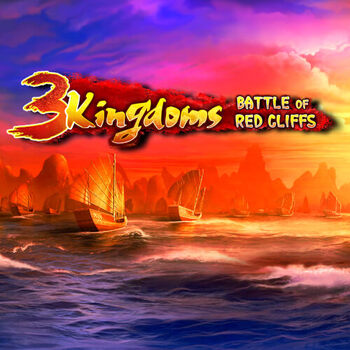 Immerse yourself in the colorful history of China, along with the powerful armies of three capable generals Cao Cao, Liu Bei, and Sun Quan. Their fate is in your hands in a game of 3 Kingdoms - Battle of Red Cliffs.

With the Battle of Red Cliffs, free spins are activated depending on the three options you choose: vanity, intrigue, or all out war. Depending on which one, a certain number of general symbols become Wild symbols on specific reels and can constitute 5, 10, or 20 free spins. Landing a Scatter on reels 1,3, and 5 can also win you more free spins.

There’s also a Spoils of War Progressive feature where the goal is to land all three generals during the base game to get one point. Getting 40 points will constitute a win and trigger the Spoils of War Bonus Game. With this, you will be given a choice between 8 envelopes which contain multipliers of different values that will be applied to the Progressive Prize: 2x, 4x, 6x, 8x, 10x, 20x, 50x, or 100x. But, this feature cannot be triggered during the Free Spins round.

3 Kingdoms - Battle of Red Cliffs is playable on any of your mobile devices with Genting Casino. Sail to the seas and prepare for a battle with luck and a test of tenacity, with a touch of history. Set your budget and spin away, but remember to stop before you get too dizzy!