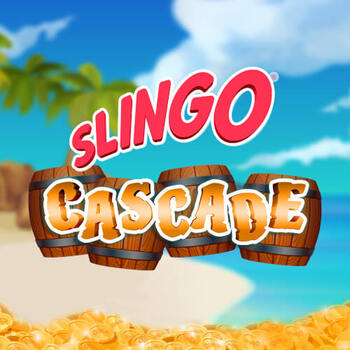 Produced by
Slingo
A combination of Slingo and the Cascade mechanic this 5x5 grid cascading slot will appeal to Slingo and pirate themed slot fans alike. The cascading mechanic in the aptly named Slingo Cascade slot increases the number of Slingos in a game. When a Slingo is completed, all five squares of the grid explode, resulting in a cascade of additional squares falling in. Slingo Cascades online slot has an RTP of 95%, which is a little lower than the market average. Slingo Cascade slot online can be played from 0.20 to 25. The maximum possible prize is 125,000.

You'll start with 9 spins to match the numbers on the reels to those in the grid. Matched reels will respin for the chance to get more matches, and if you get 5 numbers in a row (a slingo), the line will explode, allowing new number barrels to fall in. With each slingo, you move up the prize ladder. The Slingo Cascade game itself is extremely simple to play, with the goal being to create diagonal, vertical, or horizontal lines of five numbers. During each spin, five numbers will be generated on your reels under the grid. Those that match the numbers on your grid will be crossed out. To help you win more, Slingo has added the cascade mechanic to the Slingo Cascade game. When a Slingo is completed, all 5 squares in the grid explode, causing a cascade of new squares to fall in. When a number on the reel matches a number on the grid, the number explodes in the reel, allowing another number to spin in for another possible match.

This cascading mechanism increases the possibility of accumulating more Slingos in each round in the Slingo Cascade slot machine. Each Slingo you collect will also net you a prize.The cherub symbol adds a nice touch, and she can use her magic wand to help you match multiple numbers at once. The devil also increases the interest value by blocking and rendering a line inactive for a period of time.

Unlike in other Slingo games, a full house will not get you the top prize; instead, you must get 20 lines during the cascade to win the top prize. You must also get at least three Slingos to win anything.

Slingo Cascade is a great addition to the Slingo line of games. Fans of the cascade mechanic will enjoy how it is incorporated in this game. You can play Slingo Cascade at Genting Casino. The site offers a great variety of slots, table games and live casino games. Visit Genting Casino online to enjoy these titles at the comfort of your own home. If you have not tried Slingo games yet you can start with Slingo Cascade and get used to the mechanic after a few rounds. The game can be rewarding with a max win cap of 125,000.