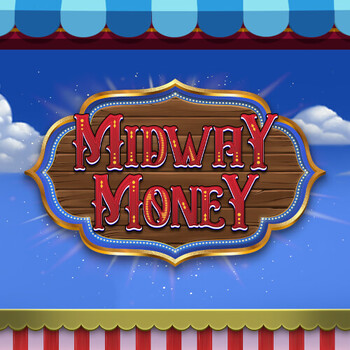 Produced by
Yggdrasil
You can play Midway Money slot for bets ranging from 0.20 to 50 per spin. Midway Money slot online grid matrix fluctuates greatly in size when the Strongman feature activates, but it typically has five reels, four rows, and forty winlines. The RTP for Midway Money is 96% which is the market average. Volatility is high which may mean stretches of non-winning spins and a chance at large value wins. The maximum possible win for this game is 6,000 times your stake.

Eleven regular pay symbols will land across the winlines of Midway Money slot game in groups of three to five to form winning combinations. 10-A card ranks, bottles, a strongman, a firebreather, a teddy bear, and a character resembling a ringmaster are all listed from bottom to top. Five of a kind winning combinations pay out 1.5–3 times the wager for low-pay royals and 4–10 times the wager for high-paying combinations. On the reels, there are three wild symbols, each of which can complete a winline by replacing other pay symbols. The first wild is a 1x1-sized logo, and the following two wilds are 1x2-sized Strength Metre symbols.

To get many of the features in Midway Money game to work, a series of connected events must take place. When two Wild Strength Metre symbols appear on reels 4 and 5, they trigger the game. The bell ringer then makes an attempt to sound the bell on top of the Strength Metre that is situated next to the reels. The metre advances one step (5%), theoretically increasing the likelihood that the bell will ring the following time, if the bell does not fully ring. The bell resets to the lowest level when it is rung.

When you play Midway Money it takes you to the fair with its features as well. A Ferris Wheel appears if the bell at the top of the Strength Metre does indeed ring. It spins to reveal one of the following feature combinations: Fire Eater, Strongman, Duck Shoot, Strongman and Fire Eater, or all three features free spins only.

When activated, the two targets represented by the Strength Metre symbols become targets, and new targets can be added to the reels. Then, all targets are changed into wild symbols for the logo.

The Strength Metre and Bonus Symbols are multiplied by 10 when awarded. All symbols with a lower value are changed into the chosen symbol after a random symbol is selected. Additionally, two wild logo symbols are scattered across two reels.

The Midway Money game is available at Genting Casino. The site contains a great selection of slots, table games, and live casino games. Visit Genting Casino online to enjoy these games wherever you are when you feel like getting a few games using any device. Midway Money is a unique game that offers a different way to enjoy the slot reels. The features enhance gameplay whenever you trigger them. If you are looking for a fun unique slot and a possibly rewarding one then this slot is for you.