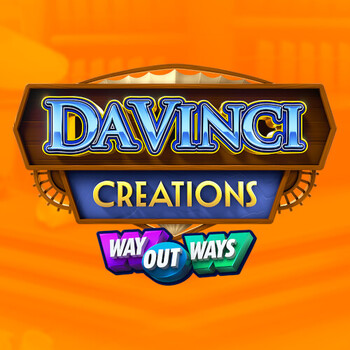 Produced by
High5Games
Unlock the potential of numerous paylines with the Da Vinci Creations slot, a captivating release from High 5 Games. This game draws inspiration from Leonardo da Vinci, the famous philosopher, artist and astrologer. Apart from that, it also comes with a range of attractive bonus extras. They include expanding reels, free spins, sticky wilds and up to 1,000,000 ways to win.

Players can play Da Vinci Creations on a codex puzzle engine that offers 6 reels, 4 rows and 4,096 winning ways. However, the number of rows can increase to 10 during the bonus rounds to provide up to 1,000,000 winning ways. To create a winning combination, a player will need to land multiple identical symbols across adjoining reels, from left to right.

The Da Vinci Creations slot online has a wide betting range, so players of all budgets can play it. The minimum bet is 0.20 coins per spin while the maximum bet is 40 coins. Apart from that, the game comes with an average RTP of 96.0% and high volatility. In addition, the maximum attainable win is 10,205x the total bet.

Players will come across an assortment of symbols when they play Da Vinci Creations slot. They include five low value colourful jewels alongside premium symbols including an image of the famous Mona Lisa painting. The golden cylindrical reels sit among a selection of famous inventions in Leonardo Da Vinci’s workshop. In addition, a catchy soundtrack plays in the background during gameplay.

The Da Vinci Creations slot comes with two bonus features. The first one is the Expanding reels feature which triggers when the numbered arrow symbol appears on the grid during a random spin. When this happens, the number of rows increase from the initial 6 to 10. This expansion remains in effect for successive spins as long as winning combinations are continually formed.

However, if no winning combinations are created, the number of reels will start to reduce one by one. What is great is that wild symbols can appear in the middle reels and turn the tables to the player's advantage. And since up to 1,000,000 ways to win are available during this feature, it’s possible to attain the 10,205x the bet maximum win.

The second feature in the Da Vinci Creations video slot is the free spins bonus feature. It triggers when three or four scatter symbols land on the grid. As a result, between 18 and 25 free spins will be awarded depending on the number of triggering scatters. When the feature is running, all wilds remaining on the reels become sticky and lock in position until the end.

The Da Vinci Creations video slot comes with great features that can really boost its winning potential. The highlight is the Expanding Reels feature where up to 1,000,000 winning ways come into play. Here, slots enthusiasts who play their cards well can manage to hit the maximum win of 10,205x the total bet. This slot game is available to play at Gentingbet.