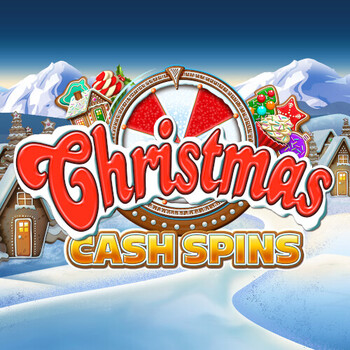 Christmas Cash Spins is played on a five to three format that offers players 25 betways. Players can start the game with bets ranging from 0.25 credits with a maximum of 100 credits and offer players a max win x1000. The game is set to have a medium to high variance. The return to player average percentage of the game is set at 94%. Players can trigger up to Bonus Games Bonus Symbols, bonus wheels, Expanding symbols, Hold and spin features, and so much more.

The game's symbols are definitely a design aesthetic that make the game worthwhile. The gingerbread Xmas tree symbol represents the wild in the game. Which can appear on reels two, three and four in the base game only and it expands to cover the entire reel when it lands. In this game, the wild holds no value on its own, but it steps in for all regular pay symbols to help complete winning combinations.

Players would need at least six bonus symbols to land at the same time to trigger the bonus cash spin feature. However, the symbols will merge into a Bonus Chance Wheel when players land 4-5 bonus symbols from the two by two squares. Players can start with three spins in  the Hold and Win Feature of the game thus triggering symbols that are sticky on the clear grid. Any new bonus symbols that are landed become sticky as well which resets the spin counter to three again.

Christmas Cash Spins is jam packed with amazing graphics and symbols that players are sure to love. The game offers players a myriad of features and bonus modes that are sure to keep players at the edge of their seats. Players will be able to enjoy the action packed theme provided with amazing hopes of furthering their fortune. Players should remember to play to their comforts and to play responsibly.