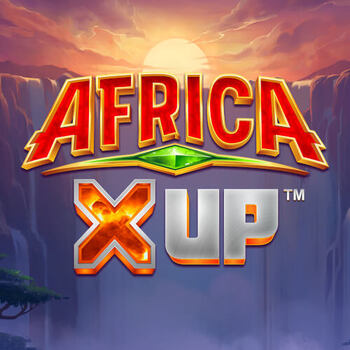 Produced by
MicroGaming
Microgaming takes players for a trip to the African savannah plains with the Africa X UP slot. Incorporating a safari theme, this game brings the big five of the African wild to the reels for some extremely volatile action. Apart from that, there are plenty of gripping bonus extras too. They include tokens, free spins and multipliers of up to 25x.

Players can play Africa X UP on a grid that has 5 reels, 3 rows and up to 243 paylines. Creating a winning combination requires landing 3-5 similar symbols on adjacent reels, beginning from the first reel. The RTP is 96.37%, a rate that's slightly higher than average. In addition, the frequency hit rate is 20.46%, meaning a win may come in every 5 spins.

Stake levels for Africa X UP slot online range from 0.30 coins to 21 coins per spin. Alternatively, players can also click on the buttons located besides the interface if they wish to adjust their bet size. The volatility here is extremely high meaning the game is very risky. However, big payouts should be expected with the max win capped at 30,000x the total bet.

Players will encounter a wildlife safari theme when they play Africa X UP slot. Symbols on the reels include colourful A-10 royals alongside rhinos, buffaloes, elephants and an African warrior. The symbol with the highest payouts is the warrior which pays 4.66x the stake for five of them in combination. Furthermore, the game also provides a scatter and a wild symbol.

One of the features in this slot game is the X UP bonus feature. It is triggered when two X UP scatter symbols land on the grid during the same spin. As a result, a token will be awarded. When the feature starts, players can collect tokens and the progress will be shown on a meter located besides the interface.

There is also a Free Spins feature which activates when three X UP scatters land on the second, third and fourth reels. Consequently, the game rewards 8 free spins plus a multiplier. Landing two more scatters adds an extra 2 free spins to the total. Just like in the X UP bonus feature, the multiplier in this feature also increases with each spin.

The African safari theme has been an inspiration behind the development of many video slots. Microgaming delivers something unique and quite exciting in this particular game. Regarding features, the collection of tokens during the X UP bonus feature can boost payouts when the increasing multiplier comes into play. This can really increase the potential of hitting the 30,000x stake maximum win.