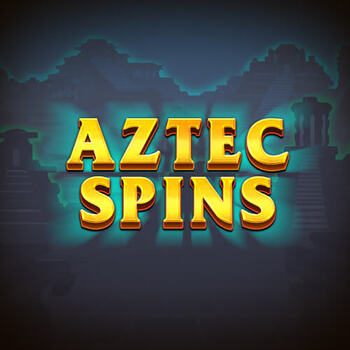 Pierce through the thick, mysterious jungle of the ruthless and prepare for a rip-roaring gaming adventure by playing Aztec Spins! Built on a 6-reel, 4-row set, the center of the action occurs on the rotating prize wheel of the game, inspired by the puzzling looks of a circular calendar by the Aztecs. This Aztec Wheel sits above the gaming area where a preview of the stone carvings in a dense jungle peeks out. With a 95.71% Return to Player rate, the bets on this game start at 0.10 to 20 each spin on a 30-payline grid. A combination of at least three of a kind constitutes a win which is permissible from both left and right directions. This win system works even better when paired with other game features.

The Aztec-themed slot symbols can also work their way into the paytable through the 10-A royals and rare premiums that are presented as a flower, a man in a headdress, twin snakes, a mask, and a pyramid. A 6-line pyramid will give you 12x while the flower symbols give you 4x the stake. While there are no wilds in the game, the Aztec Wheel is set off when a 2x2 Aztec Wheel symbol lands visibly on reels 3 and 4 which awards a spin on the wheel resulting to Stacking Multipliers, Locked Symbols, Free Spins, or Wheel Respins. If the wheel stops on a pay symbol, this symbol fills out both reel 3 and 4, stacking them while the other reels remain spinning until a win occurs with the new similar symbols locked in place. This is called the Locked Symbols feature. In contrast, players get 12 free spins if the wheel lands on Free Spins on the base game, allowing the wheel to set off more often.

Dive deep into the oozing dangers of the ruins by registering to Aztec Spins on Genting Casino! Keep in mind to set a gaming budget and only gamble what you can afford to lose.